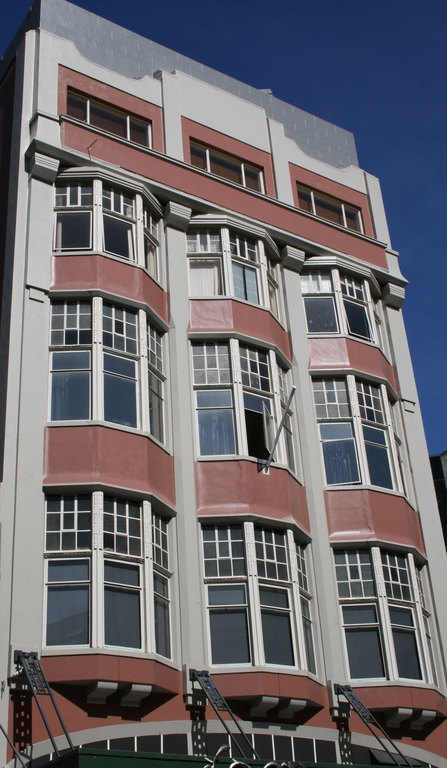 The Dresden Piano Company, later Bristol, on Princes St, Dunedin. The building was again renamed Capitol after its sale in the mid-1950s. Its facade was simplified at the same time.

The source of the Theomin family’s wealth was the importation and sale of sheet music and musical instruments, particularly pianos. The Dresden Pianoforte Manufacturing & Agency Company was established by David Theomin and Frederick Michaelis in 1883.  As David Benjamin, he had joined forces with Michaelis to manage the Glendermid Tannery in Dunedin’s Sawyers Bay but this messy industrial business soon gave way to the more artistic and profitable pursuits of a music agency. During the 1880s, David Benjamin had changed his name to that used by his father’s family in Prussia while the city of Dresden, known for its musical instrument makers, leant its name to the new business.  By 1913 it was one of the largest operations of its type in New Zealand and its head office was a newly built multi-story  tower on the top of Bell Hill on Princes St. The worsening outlook in Europe leading to the First World War made German names a focus for hostility and while not changing his preferred surname, the business was restyled the Bristol Piano Company during the conflict.  Theomin took out newspaper advertisements informing the public that the business was all British while he himself had been born in the city of Bristol.

The Bristol Piano Company building was designed by Dunedin architects Salmond & Vanes and was one of the most modern and progressive commercial buildings in New Zealand when it opened in 1913. Rising five levels, it had a two story deep basement where deliveries and repairs were carried out. The facade was sheathed in yellow and black faience tiles while deep projecting oriel bay windows lit the ornate interiors which were also fitted with electric light. 1912 was the peak year for the importation of pianos into New Zealand but gradually this profitable market slipped away to other more ephemeral forms of entertainment such as recorded music and film. The piano was a long lasting instrument and many examples sold by the Bristol Piano Company are still playable today. The boom years, however, gave the Theomin family a secure and prosperous life style reflected both in Olveston and the Capitol Building which still stands in Princes St although modified from its original Edwardian appearance.