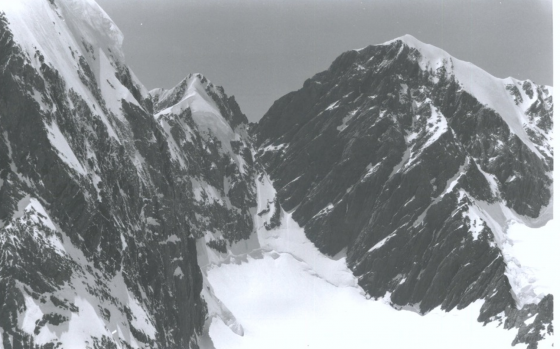 Dorothy Theomin who gifted Olveston and its collections to Dunedin in 1966 led a rich and adventurous life. Like many well provided for young women of her age she was an enthusiastic international traveller. She was educated in England at the progressive Roedeane School and accompanied her parents on their extensive tours of Europe, Canada and North America. She also saw a great deal of New Zealand and from a height that few others experienced.

Her independence and physical fitness saw her join the New Zealand Alpine Club and she climbed extensively in the Southern Alps between 1914 and 1933. Her climbing outfit consisted of a woollen skirt, puttees and heavy leather boots with hob nailed soles. Puttees were originally a Himalayan tribal garment, a form of lower leg wrap that protected the limb from freezing winds. She often climbed accompanied by male guides but was capable of challenging ascents which she recorded with her camera.

Dorothy Theomin’s alpine photography was unique in New Zealand when few women took up this hazardous pursuit. Many of her photographs are held in the Hocken Collections where they were used in an exhibition showcasing this surprising side of her life.  Its curator, Marjory Blackman, a long time Olveston volunteer is also the author of ‘Dorothy Theomin of Olveston – Mountaineer, photographer, traveller & benefactor’ (2007) that details her alpine adventures. It is well worth reading if you want to get the know the character and background of this extraordinary woman.