In the “Persian” or Card Room at Olveston the decor is made up of exotic pieces predominantly from Asia and the Middle East. A North American Indian beaded bag hanging in a corner of the room seems an incongruous addition, but then again, calling an indigenous resident of the Americas an “Indian” is also incongruous. Christopher Columbus got it wrong when he thought he’d found an alternate route to the East Indies spice trade in the late 15th century. 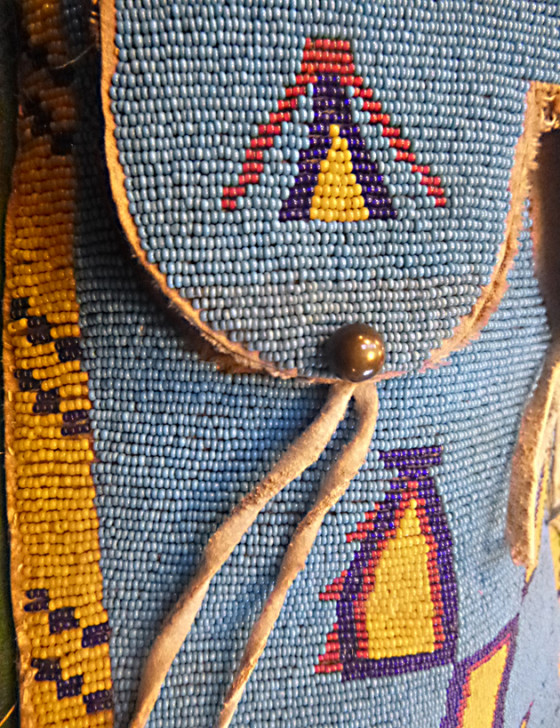 The bag itself is made of soft hide (buckskin), with a wrist-strap, flap fasteners and a long fringe at the bottom edge. An overall decoration of stitched rows of seed beads creates a ribbed appearance. Ornamental beadwork is one of the best known art forms practised by American Indians and design elements were distinctive to different tribes. Judging from the geometric design and beading technique, this bag is most likely an example of a 19th-century Plains Indian artefact. (Historically, many nomadic tribes followed the seasonal migration of the bison herds on the Great Plains, west of the Mississippi River. They included the Sioux, Crow, Pawnee, Comanche and others.)

Beads wereone of the earliest European trade goods; glass beads have been in use for almost five centuries in the Americas. The art of making glass beads probably began in Venice; other production centres followed in Bohemia, France, England and Holland. By the middle of the 16th century, Spaniards were trading beads into New Mexico. Before long they were spread far and wide, especially when Native Americans realised the design possibilities of using the small, brightly coloured beads on all sorts of items. They already had a beadwork tradition utilising quills, bone, wood, and shells but the small glass beads enabled more intricate designs. 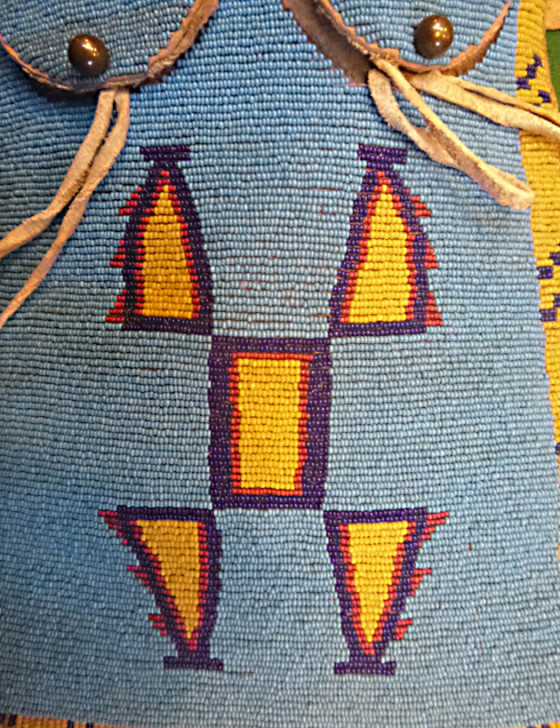 Plains Indians were highly mobile – they had to pack up and carry all their possessions by horse from camp to camp, and as their clothing did not have pockets, all items had to be placed in pouches, bags and containers. These were utilitarian in design but decorated with care and purpose, transcending the physical object to a higher consciousness and a direct connection to nature and the ancestors.

There was a proliferation of beadwork during the mid-19th century, with time on their hands due to forced relocation onto reservations, and the curiosity factor of tourism creating a market.

Unless we have personal knowledge of the complex cultural and social relationships that enhance understanding of indigenous art, most of us remain outsiders. We can be moved by its aesthetic appeal and the background story when thinking of the hands that created it. Collection items bridge the past and the present, letting us see how things used to be and providing a link to how customs and attitudes change. Looking at this small beaded bag, I am reminded of how I felt when I first read “Bury my Heart at Wounded Knee” – the tragedy of the tribes’ lost freedom.