Scratch the surface of any artistic endeavour and there is a story to tell. This brief one, from the Victorian era, touches on geography, social history, politics, folk heroes and royalty, and more  – obviously a bigger story than will comfortably fit this summary. Therein lies the captivation of the collectible.

It is interesting that humble, working-class items can become objects of desire for wealthy collectors. Such is the case with Staffordshire flatbacks, of which there are several in the Theomin family’s library at Olveston: Little Red Riding Hood stands beside a Prince of Wales figure; there is a sleeping drummer boy, a girl with a wheat sheaf, musicians, a sportsman with a gun … a snapshot of the diverse subject matter that typifies flatback figures.

What is a flatback? The figures, also commonly called “chimney pieces”, are cheap earthenware ornaments made initially for modest country cottages by relatively unskilled labor. Detailed only on the front and slim enough to fit on a narrow shelf (primarily fire-place mantels), they were made from the 1840s to the early 20th century up to World War 1 and can be classified as naive folk art.

Over one hundred manufacturers produced them, working throughout the Staffordshire Potteries – the industrial area in the English midlands encompassing the six main potting towns that now make up Stoke-on-Trent in the county of Staffordshire. The area, rich in clay and coal, became a centre for manufacturing pottery over 200 years ago. In early days potters would simply dig clay up from roads, leading to the term ‘pot holes’. In its heyday there were about 4,000 smoky, coal fired distinctive bottle-shaped kilns.

Business increased considerably with the opening of better roads and canals and railway distribution in the region, but times were grim. The Pottery Riots took place in the midst of the 1842 General Strike, opposing wage cuts, and though many strikers were sent to prison, some even transported to Australia, the fraught industrial relations were a prelude to establishing trade unions.

The working population of Britain was hungry for heroes. In the Staffordshire flatbacks, close likenesses became possible from the 1840s when good quality illustrations such as The Illustrated London News, sheet music, playbills, and ‘Penny Plain, Tuppence Coloured’ prints could be used as sources. Topics reflected the news of the day, whether concerning the Royal Family, the Crimean War, politicians, murderers, sportsmen, circus performers, soldiers, sailors, generals, religious figures, explorers etc. – all now immortalised in clay. 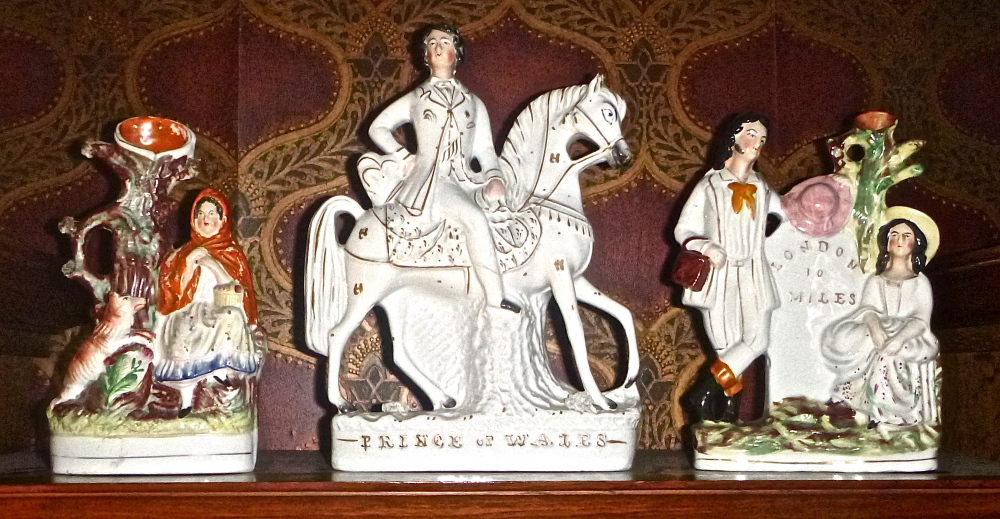 Staffordshire flatbacks from the Olveston Collection